My Time with Gord Deppe from The Spoons. 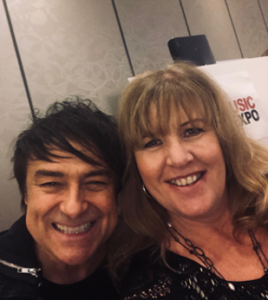 I think Gord just may be a vampire, because he DOES NOT age.   I had the awesome privilege to connect with him at the Music Expo on January 25th, and between the droves of fans vying for pictures and autographs, I asked him a few questions.

Ingrid:  Gord, you are busy. The Spoons are still going strong and released a new album last year. You’ve been touring as lead guitarist with a Flock of Seagulls, written a book, and had the video for “The First and Last Time” featured in some big indie film festivals, What’s next for Gord?

Gord:    Yeah, I am a lucky guy!  Very grateful, it’s been an awesome career.  I guess the next big thing for me is the cross Canada tour for the 40th Anniversary of The Spoons.  We will be touring with Men Without Hats, and Flock of Seagulls, so I’ll be playing for both Flock and Spoons.

Ingrid:  About Flock of Seagulls.  How the heck did that all come about?  I saw you in the summer, and you fit right in.

Gord:    It was crazy.  I met Mike Score in 1982 at the Police Picnic, and we hung out for a bit.  I didn’t see Mike again till years later at a charity event, when I filled in on guitar for Flock last minute. Their music is pretty similar to The Spoons, so it was easy.  A few years ago, I was sitting in a café in Italy with my fiancé and got an email from Mike.  Something like, “hey, you want to play guitar for us?”  “For a few shows?” I asked.   He replied, “we can start there, but I was thinking joining as a full band member.” It’s been awesome.

Ingrid:  You and I have something in common.  We both started school not speaking English, just German, so I am going to test you on your German.  When I used to go out with friend in the 80’s, my mom always said to me, “Du siehst aus wie eine Zigeunerin!”

Ingrid:  Do your kids speak German, or are they like mine, and know a few words and phrases?

Gord:    Not much, they just know a few things too.

Ingrid:  Here are a few of my kids favourites. Fliegenklatsche.  (almost stumped him here)

Gord:     Wooden Spoon.  Thats what we should call ourselves when we tour Germany, Die Löffel (guffaw guffaw).

Ingrid:  You started playing at a very younge age.  What piece of advice would you give to young bands just starting out?

Gord:  It’s a lot harder now.  I think today, you need to avoid being too “normal,“ be unique, find your own sound, and stick to your guns.  Touring helps and you need to network, get your name out and be memorable.

Ingrid:  If you could go back and change one thing in your music career, what would it be?

Gord:  In the early days, the Spoons were way out there. We should have done some more mainstream music. Stick Figure Neighbourhood has some crazy stuff, like Red Light.

Fun Fact:  Gord’s dream is to see Romantic Traffic in a car commercial. No takers yet…